What are NFT Games?

The most-hyped art sales in 2021 were driven by non-fungible tokens (NFTs), but the underlying technology also presents opportunities for the gaming industry. So what exactly are NFT games? 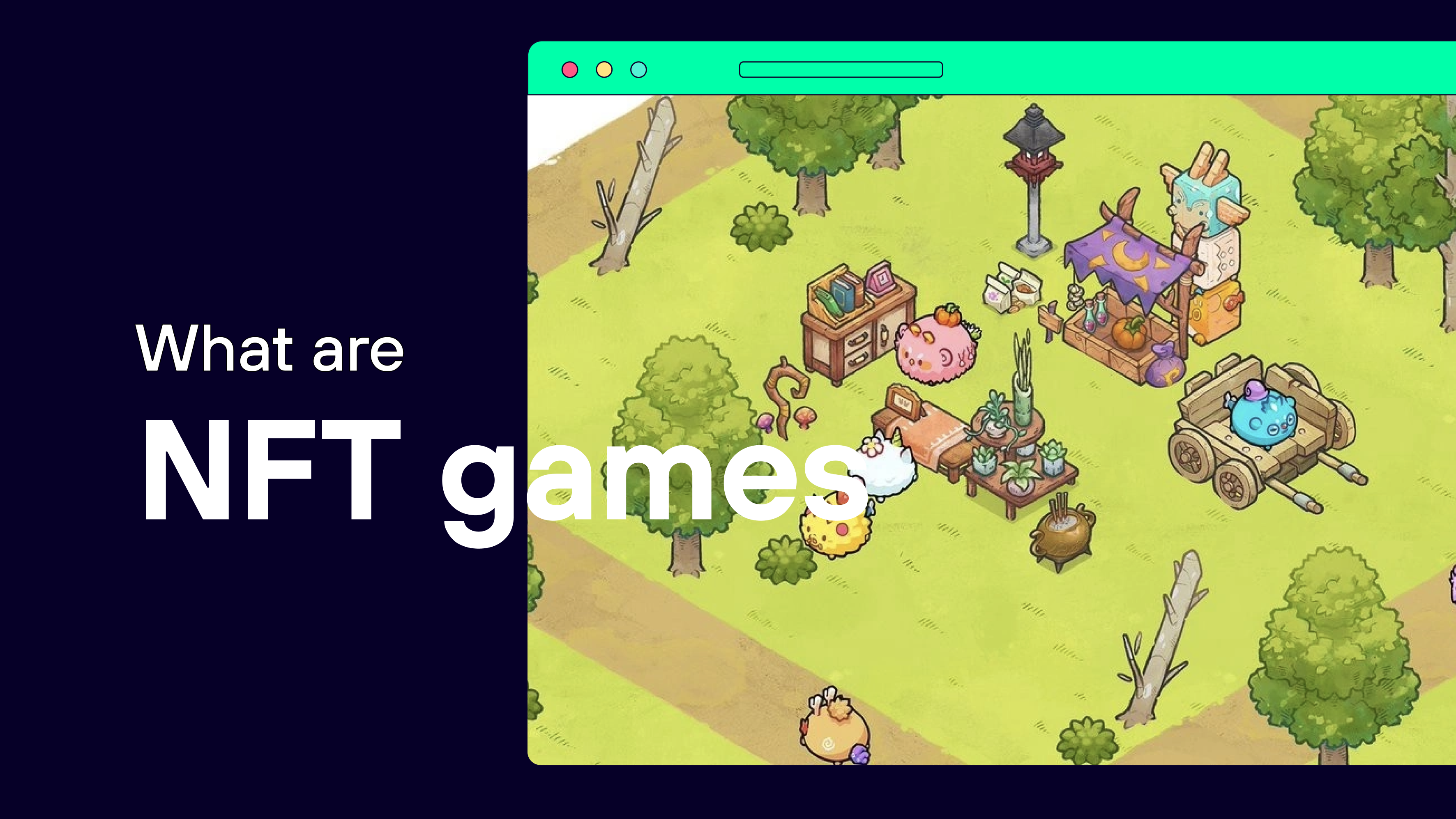 As new blockchain apps and NFT markets have appeared this year, games that incorporate non-fungible tokens (NFTs) have exploded in popularity. As traders hunt for new ways to earn, digital currencies native to new NFT games are increasing in the rankings of the world's top cryptocurrencies.

"While the play to earn or the NFT debate is still really, really early, collected NFTs will be a significant part of the future of our industry."

If you're seeking the meaning of NFT games, we've put together a complete list of everything you need to know.

What are NFTs (Non-Fungible Tokens)?

A Non-Fungible Token (NFT) is a blockchain-based digital cryptographic token representing a single item. An NFT can be used in a variety of situations. It might be a game's digital asset, a valuable piece of crypto art, or even a physical item like real estate.

In a "copy-paste" world, NFTs have addressed the long-standing problem of producing decentralized digital collectability and ownership.

An (NFT) is a token that is not fungible in any way. This attribute indicates that each token is unique and cannot be swapped for another token in the same way.

In every way, you can exchange 1 BTC (bitcoin) for another 1 BTC. This is impossible with an NFT, even if the NFT is part of a series with many variants. Each NFT's metadata will differ in this situation, just as it would in a numbered series of prints.

What are NFT games?

Gaming is being hailed as one of the sectors where NFTs can help drive growth. They make it possible for content creators to monetize their work, while players can earn cryptocurrency by engaging with it.

To authenticate unique digital items, NFTs use blockchain ledgers. This is crucial to the operation of NFT games.

The worth of an item is determined by its use and rarity. Developers use Smart contracts to define how NFTs work in the game. On the blockchain, the contracts are stored. Items are traded in the same way as tangible assets are. The blockchain keeps track of every transaction.

Some NFT-earning games are structured as metaverses, where players can earn rewards for playing and improving their skills. Players are rewarded with cryptocurrency tokens that can be used to purchase NFTs.

How do NFT Games work?

Keeping crypto-collectibles in your wallet isn't the same as playing NFT games. In an NFT game, NFTs will be used in the rules, procedures, and player interactions.

An NFT could be used in a game to represent your unique character or avatar, for example. NFTs are also found in digital items discovered during the game. You can then sell or trade your NFTs to other gamers for a profit. Greater profits can be earned from NFT games by following a newer, play-to-earn model.

So, how do you include NFTs into a game environment technically? Developers create smart contracts that define the rules for exchanging, producing, and implementing NFTs in games. On a blockchain, smart contracts are self-executing pieces of code.

CryptoKitties, for example, is structured by a small number of core contracts. Their gene science contract is the most well-known, as it governs the random mechanics that generate new cats. Initially, the game's code was kept under wraps.

Players interested even devised algorithms to calculate the chances of specific cat features showing up. Players could use this information to improve their chances of creating a valuable rare breed.

NFT games have branched out from the Ethereum blockchain to run on other chains, some even operating on multiple chains. Several games have swiftly risen to the top of the most popular NFT apps list.

Based on the number of users, below are the top five NFT games, according to data from Dappradar.

The NFT game provides entertainment and happy emotions, but it is also a unique and modern investment. It could be viewed as a viable alternative to traditional savings methods. You may combine a pleasurable hobby with a profitable endeavor.

To be clear, you should purchase an asset in a game and then sell it at a greater price later. However, keep in mind that in NFT games, players can not only invest their money in the acquisition of assets, but they can also start from the beginning without investing and grow their character by doing various actions.

Furthermore, practically every NFT game features elements that allow you to gain bonuses – token drawings within the game, as well as competitions that might award you money.

Best NFT Games to play and invest in 2021

Here's a list of some of the most profitable NFT games for 2021. These are entertaining games where you can trade stuff and in-game characters with other players. Many of these are NFT games that you can play for free in exchange for prizes.

Idle Cyber is a 2088 frontier defense game in which humans command a squad of mutants to defend humanity by defending the wall, killing cyborgs, and conquering enormous bosses.

Idle Cyber is based on BSC and seems to have a lot of potentials for gamers to make money by earning, staking, and trading NFTs. This concept is sound, and investors can make a good return on their investment.

Pancakeswap is where investors may purchase its token.

In this free-to-play and play-to-earn trading card game, users can create decks and compete against one another. As per a statement on the game's official website, thanks to its superb in-game features and creative animations, it has increased to more than $1.3 million in less than a month.

All parties own their assets because the cards are provable property in Ethereum. In May 2021, Griffith, The Chosen, an example NFT card, sold for $12,000.

On major NFT exchanges like opensea.io, CryptoKitties can be sold. Dapper Labs designed the game on Ethereum and released it in November 2017.

Believe it or not, collecting and caring for digital cats is a fascinating hobby. The game's popularity, for example, caused Ethereum network congestion and made news in 2017.

Illuvium is an open-world RPG adventure game featuring a play-to-earn framework that allows users to earn in-game rewards. Players may look forward to a new era of NFTs thanks to the integration with Immutable X.

You get 0% gas costs, peer-to-peer minting, and instant transactions, all while keeping secure management of your money. It combines elements of classic RPG collection games with Autobattler-style fighting mechanics.

The Illuvium game will be available to the general public in 2022.

The Sandbox is a virtual metaverse where you can own land, play games, and even create your own game. You can govern the huge virtual universe as a collector, artist, game decider, or simply as a gamer who rambles through the metaverse, jumping from game to game.

Sand's own money is used in the Sandbox, constructed on the Ethereum blockchain.

It is one of the most popular cryptocurrency metaverses. It has created an editor that may be used to make models and animations for the blockchain's future edition. It is the best game to play if you want to own digital land or real estate, and it will most certainly have a large presence in the metaverse.

It's easy to see why play-to-earn gaming has grabbed the crypto world by storm. Participants in this unique adult-oriented gaming paradigm are rewarded with cryptocurrencies or NFTs simply for playing games they would otherwise play for free.

Axies infinity, Play to Earn's most popular platform at the moment, allows users to collect Axies that they may use across the company's world of games. The company then leverages blockchain to reward its participants for participating.

However, it's worth mentioning that, at least at first, play-to-earn gaming isn't technically free. To get started with Axies infinity, you'll need three axes, each of which costs money. You may need to spend $1000 or more to achieve this criterion.

"It's no surprise that Axies Infinity has such a large following. The opportunity to gain real-world value by playing a blockchain game draws individuals into the market since value can be generated while having fun. By adding NFTs, you earn money for your time and gain an asset. You can get these NFTs by buying them, earning them, or getting them as gifts. Players can level up their NFTs and resell them in a marketplace in some ways."

According to Steven Walters, CEO and founder of Gallant Token.

"Play-to-earn gaming also demonstrates how NFTs are the building blocks of the internet of the future. I consider it a game-changer to be able to own a digital asset fully and subsequently sell it permissionless outside of the platform where it was generated."

According to Diego Di Tommaso, co-founder and COO of OVR.ai.

Pros and cons of NFTs

Non-fungible tokens (NFTs) are currently receiving the most attention they've ever received. We'll investigate the merits and potential pitfalls of NFT investment, given the amount of interest and intrigue they've sparked.

Both artists and business owners can benefit from the NFT.

NFTs were designed to assist artists in making more money in a digital landscape that hasn't always been fair to them. The artist earns more money if their work rises in value, which it does when it becomes popular on the internet.

If their authenticity is verified on the blockchain, NFTs can't be modified or substituted in any way. Authenticity's intrinsic value transforms into a tangible, extrinsic value.

Smart contracts, which are at the heart of blockchain technology, allow for automatic executions in response to particular conditions. The artist will be instantly reimbursed if the NFT owner resells it for a profit and the artist includes a royalty "rider" in the contract.

Pride of ownership and support of the arts

NFTs provide philanthropic donors with a direct way to support the arts while adding a one-of-a-kind item to their collections.

NFTs are quite popular, yet the field is still developing. The following are some potential pitfalls:

At the moment, the aesthetic and sentimental worth of an NFT is the sole determinant of its value. It's hard to determine how much it's worth as a long-term investment at this point, so it's just speculation.

The ownership of a unique NFT does not imply control over its distribution or reproduction across platforms. They own the "original," yet they have no authority to prevent "prints" from being manufactured.

So, how do you forecast the NFT market in the following years? If this is true, only time will tell.

NFT gaming combines digital collectibles with rules that allow players to interact with each other's NFTs. While some people collect NFTs for the sake of collecting, others seek them out for their utility.

Many NFT games function similarly to trading cards, although not everyone who collects the cards intends to play. New NFT game economies have been built by Game-fi, which has transformed how users can earn money with NFTs.

It's no longer just about luck and collecting to make money; it's also about playing too.